IEBC Senior Commissioner Wafula Chebukati announced Kenya’s President Elect as William Ruto. However, his deputy Juliana Cherera told reporters at a different location that she and three other commissioners disclaimed the results minutes before the chairman announced that Ruto had won the vote.

We are not able to take ownership of the results that will be announced, because of the opaque nature of this last phase of the general election, Said Cherera.

Juliana has come out again and made a statement giving the reason of her statement. In her statement which is based on the IEBC official presidential results, the deputy commissioner says that the total results exceeded the 100 percent mark.

The total exceeded the 100 percent mark, the 0.01 translates to 142,000 votes which made  a significant difference in the presidential results.

Comparing Juliana’s calculations to the actual results shows she made a miscalculation as the figures she used have been rounded off to two significant figures. The bold and wrong statement has stirred mixed reactions from supporters of the opposing coalitions with some opting to educate on the mathematics calculation. 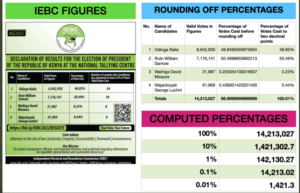 The statement made by Juliana has elicited various reaction with many opting to unravel her education background.

Cherera was sworn in by Chief Justice Martha Koome on September 14, 2021, at the Supreme Court in Nairobi, alongside Irene Cherop, Justus Abonyo, and Francis Wanderi.

The four filled in vacant positions left by the departures of Roselyn Akombe, Margaret Mwachanya, Paul Kurgat, and Connie Maina following the 2017 General Election. Her job is to assist Chebukati and make sure commissioners have everything they need to do their jobs at all times.

While still employed at KSG, she also completed a Senior Management Course (SMC).