Nicah the queen announces break-up with her boyfriend.

Social media influencer Nicah the queen has announced her break-up with his boyfriend Slahver. The ex-couple has recently been flaunting their relationship on social media which caught the attention of many.

At one point the influencer said she had to get permission from her boyfriend on what picture to post on her socials, and even washed her boyfriend’s feet to shave his hair. Well, no one saw the break-up coming.

Nicah took to her Insta stories and wrote a caption on their sudden break-up.

“Slahver and I have decided to call it quits and go our separate ways. People can fall in love and they can also fall out. All in all, we move on regardless. I wish him nothing but the best.” 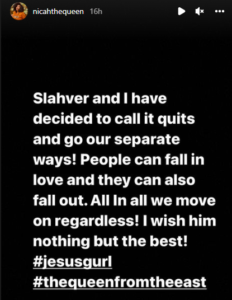