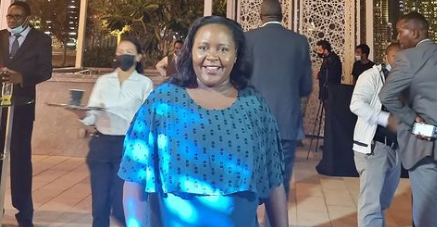 Businesswoman Sarah Kabu in an interview revealed that she would be separating from her husband Simon Kabu. Speaking to ‘The voice of East Africa’ with Tina Lewis, Sarah talked of the woes that have invaded her marriage, pointing out the massive invasion from Simon Kabu’s other baby mamas.

Recently the business entrepreneur took to social media to rant about Simon Kabu taking off with her kids without her permission.

Apparently, Simon had the help of her 24-year-old daughter and left with Sarah’s kids. The saga brought to light Simon’s previous relationships, which he admitted bore his daughter.

Sarah has also said the decision to part ways is due to the abuse she receives from Simon’s other baby mamas, which spiraled after they gifted their children property on the coast.

She added that she knew Simon had other kids outside their marriage and had agreed to support them from a distance without interference in their relationship.

Things however did not go as planned as one of the baby mamas is very dramatic. Sarah said the drama and aggression got too stressful to handle.

The business mogul said that she is at a point where she thinks a peaceful separation and co-parenting would be best for self evaluation.