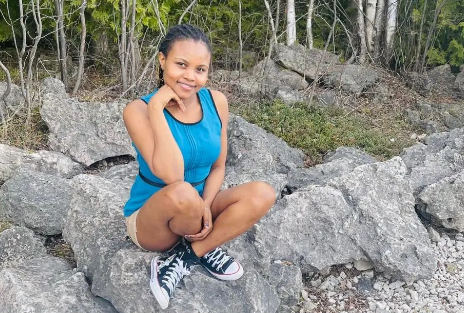 Hellen Wendy’s father addresses the media for the first time and dismisses premonition.

John Nyabuto, Hellen Wendy’s father has voiced his sorrow and heartbreak over losing his firstborn daughter, a Kenyan woman who drowned in a swimming pool in Canada while live streaming on Facebook.

The father of six described the painful moment when he realized his daughter had passed away. He watched the video, but all he could make out was his contented daughter swimming.

When a Canadian called to convey the awful news, reality hit him, and he started crying nonstop.

In 2018, Hellen Wendy traveled to Canada to pursue a career in nursing. She represented the family’s future, in her father’s opinion. She had been providing for her family and even for her own tuition.

The grieving father is now pleading with well-wishers for assistance in returning his daughter’s body to the family for burial.

“I watched the clip from my phone. I saw it was my daughter swimming excitedly. I did not see anything unusual, She was just swimming, talking to the camera, and she looked very happy. However, I saw people writing sorrowful comments, and I did not understand why they were saying bad news, yet she was just swimming,” he said.

Hellen’s father also refuted claims made on WhatsApp images that have been making the rounds on social media that his daughter, 24, had a premonition about dying.

John revealed that his daughter moved to Canada in 2018 on a visa that was intended to be valid for 10 years. He claimed she was a cheerful woman who frequently transferred money earned from her work as a nurse to support her family.

“I hear some people claim that she had said on WhatsApp that she would soon die in Canada. That is a lie and as a family she never told us anything of that sort. She was also lively and very jovial and had never shared that she was in any kind of trouble.” he added.